This is Silka with a recap of TaernCon 2022. I know that our veterans are used to Dawid’s (our MC who usually wrote these recaps - translator’s note) flow, so let’s consider this a small update. :)

After a three year hiatus, Wrocław is once again home to the event long-awaited by us and our wonderful community – TaernCon. How was the event? What went fine and what went wrong? What do the players and developers think of it? What do cows need a love elixir for? You’ll find answers to all of these questions in this event report!

On July 2nd in Zaklęte Rewiry, it was very hot from the very beginning and I don’t just mean the weather! This year, the participation numbers were great - as many as 206 people attended the event! Starting at 4PM, the courtyard was filled with revelries and the smell of sizzling delicacies, prepared by the Barbecue Master. At the entrance, our guests were greeted by our Game Masters and Administrators and given a unique ID card. The Team members had an unexpected sidequests - we didn’t prepare enough cards so we had to procure them for our unexpected (but still welcome!) guests. Nevertheless, they did a great job.

A moment later, Taernians entered the hall prepared and decorated by the Team. The opening ceremony was epic! The organizers didn’t wait, they jumped straight into the world of Broken Ranks. Battlling Dragons (the game’s soundtrack can be found HERE) by Kamil Orman–Janowski played in the background and the Founding Fathers of the studio entered the stage illuminated by the spotlights - the limping yet undeterred Drygu, charming Torgerd, and mysterious Pan Tomasz. Like every year, the MC of the official part was Dawid with his unique panache and sense of humor.

After a short introduction, the TaernCon 2022 Cosplay Competition began. The jury consisted of the Founding Fathers and two people from the audience. Our engineers, Daro and Cassi, watched over the scores. I think that this year’s cosplays had a really matching vibe. They weren’t just mere mortals but the representatives of the most popular characters in the game. 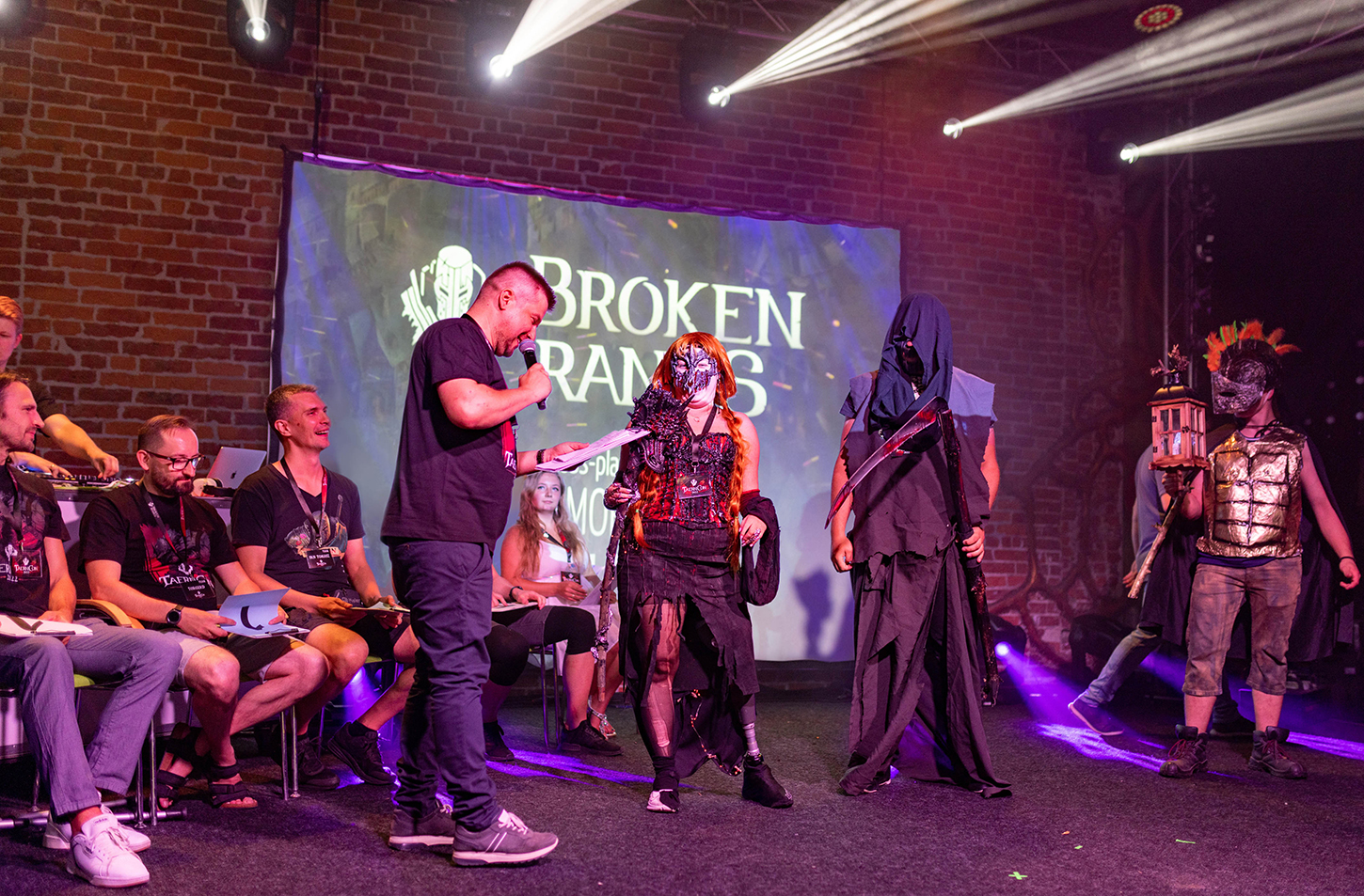 The first place was taken by the hottest participant of the event – Kafelcio, cosplaying as a fire mage. She was working tirelessly on the costume for almost two months! The second place was awarded to Piotrmmaj whose druid blinded everyone with his shining, golden six-pack Lantern of Life. Last but not least was Ruukk cosplaying as death. The artists were given commemorative t-shirts and valuable prizes (you can find more details HERE). The participants paid back in kind with the handcrafted weapons - the legendary Wurm and death’s scythe. 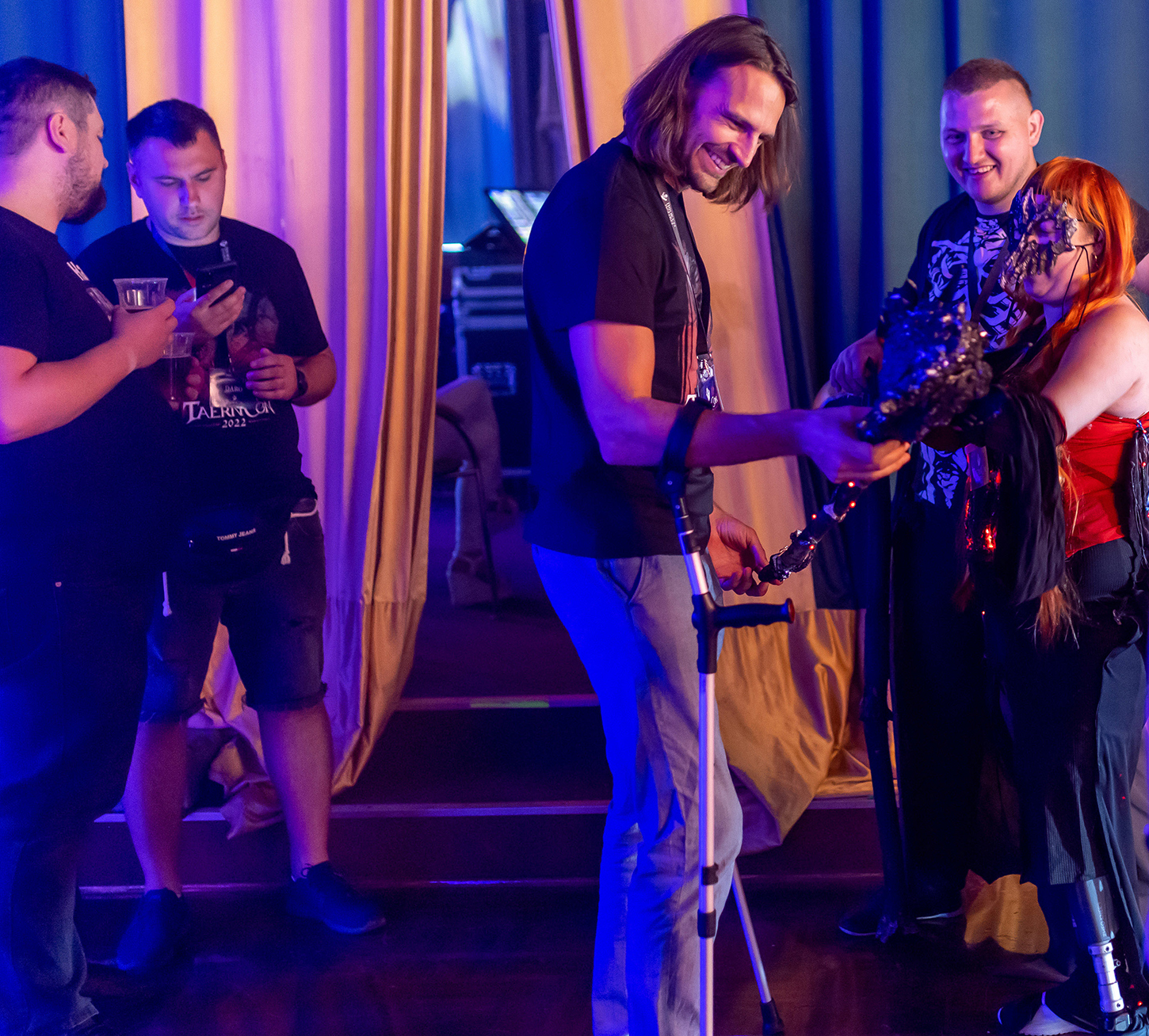 After the competition, Zaklęte Rewiry were visited by a well-known Broken Ranks Knight. You could take a photo with him in front of a canvas with an armor in hand or a helmet on your head. However, it’s better to show than to tell: 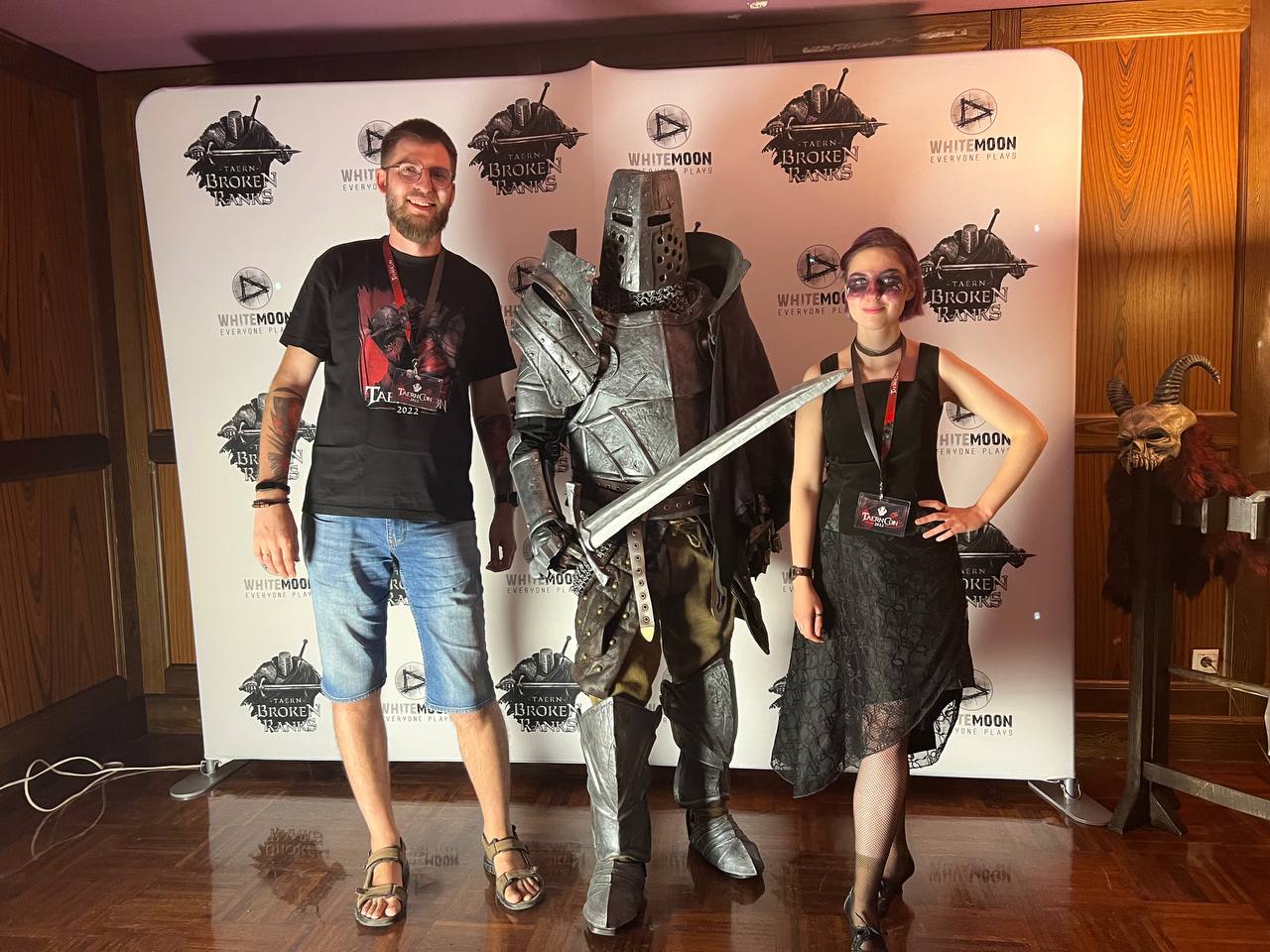 At about 7.40PM, the Broken Ranks trivia contest began. The leaders of the brain race were Mantis (2nd place) and the smart siblings – Szczuruś (1st place) and Stefka (3rd place). The participants showed their knowledge of the world of Taern, but the excited audience also dropped a hint or two. For some this was just trivia, for others it was a battle for honor. One of the participants described it to me this way after the prizes were given:

“F**k, that was the shit! I almost got up on stage but they told me only top3 is allowed, not top5! And I was fifth, can you believe it?! Damn fifth!”, what can I tell you, friend? It’s not the end of Taern, come back next year! 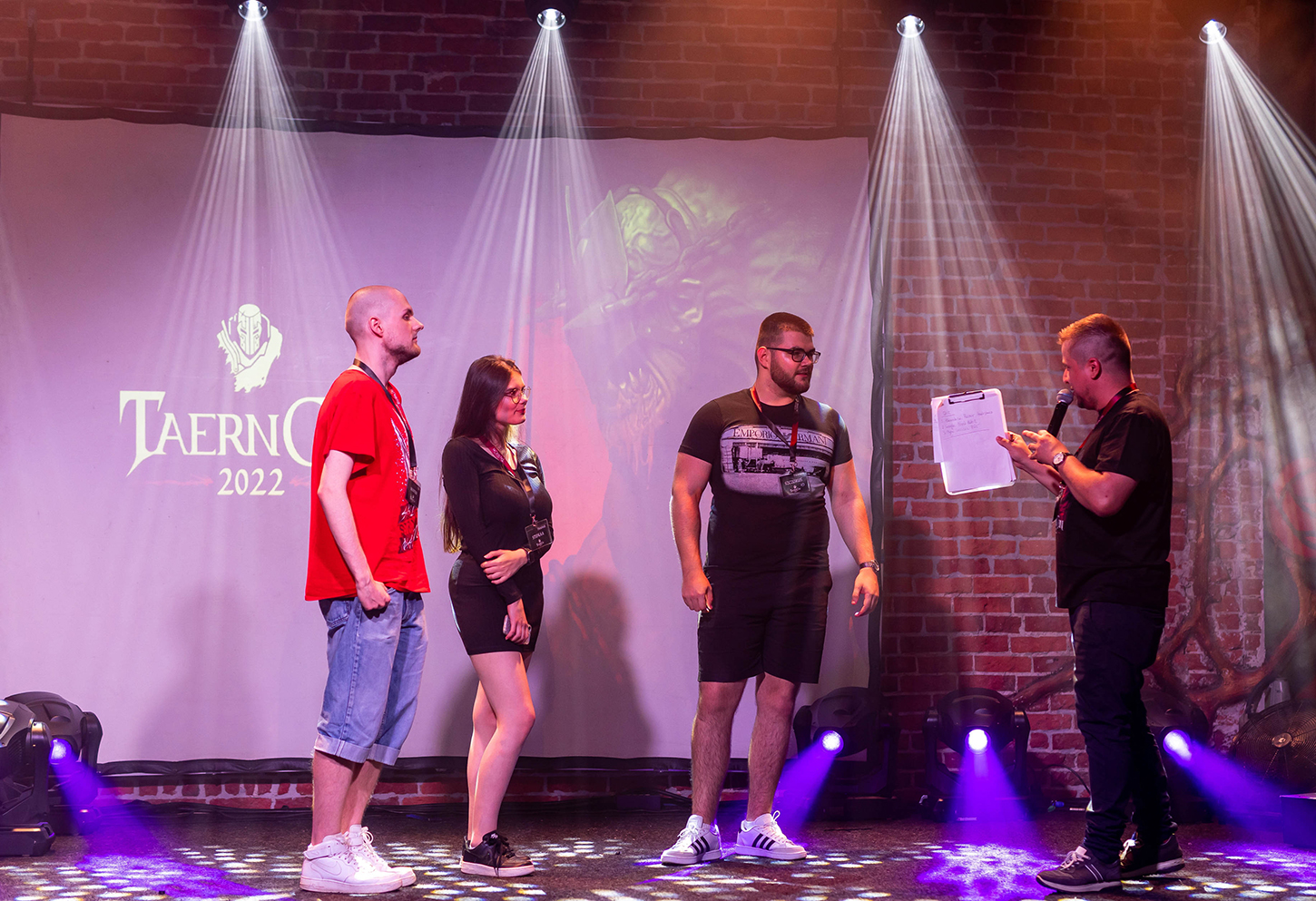 From the left: Mantis, Stefka, Szczuruś, and Dawid

The Q&A sessions with our Founding Fathers was a real blast and no wonder! Game producers interacting so directly with their players is a rare occurrence (not to mention all the fans hugged by Drygu…). Instead of the scheduled 20 minutes, this part of the event lasted almost an hour. Drygu, Torgerd, and Pan Tomasz were getting question after question, the queue was getting longer and longer, and Dawid had trouble keeping the microphone from being taken over by the participants. I can tell you that I actually managed to get a hold of it but not for long! At the end, my favorite editor, Ademin, was given praise (and unfortunately only that) for the best question:

“If you’re thinking of adding more brothels to Broken Ranks, why don’t you create a khold brothel this time?”

What did the developers say to that? All those who attended know and those who don’t will learn… or maybe not. Let’s leave it as a surprise and encouragement to attend future TaernCons! :D

On this high, yet slightly prolonged, note the official part ended and… a true party began! The hall reminded me of some crazy cycle of birth and death - the thirsty Team and players visited the event “tavern”, burned the “fuel” on the dancefloor, and then went back to the bar in search of the life-giving fluids. Although, there were also those who spent the night talking downstairs or on the stairs - the favorite place for some Taernians to respawn.

After a couple of days, when the fist of the khold rotgut finally let go of the stomachs of my coworkers, I managed to put together this ranking of game-inspired drinks! Here it is:

I could tell you even more about TaernCon, the wonderful participants, and the dedication and stamina of the Team, but it’s just impossible. No report, no matter the medium, will be able to convey the crazy energy, the feeling of unity, and the ocean of joy that every player in the world of Taern feels (both in the game and during the events). You have no choice, my dear readers, you’ll have to see it for yourselves during future conventions!

Attend our yearly events, visit our website and social media platforms, read posts with the hashtags #brokenranks, #taerncon2022, and #whitemoon. It’s very important for us, because it lets us expand the world of Broken Ranks and, more importantly, do it faster and better.

Thank you for reaching the end, I’m more talkative than Veela on speed, and for participating in the fun both online and offline. I’d also like to thank our wonderful players for their dedication. You’re the ones who support us every day, help us expand the world of Broken Ranks, and motivate the Team to take up new challenges so that we all can enjoy the universe of Taern and the delicious drinks during conventions. :)